Let’s be honest, female rock/ pop singers don’t get as much attention as their male counterparts nowadays. To celebrate International Women’s Day, Babylon Radio wants to introduce you to one of the most successful rock bands that have a front woman.

Paramore is an American rock band which was formed in Franklin, Tennessee where front woman Hayley Williams met the brothers Josh and Zac Farro. Later, at the age of 13, she joined a band that the Farro brothers had formed with guitarist Taylor York. Hayley then left the band to join Atlanta Records but independent as she was, she disagreed with the label’s way of directing her music and convinced them to allow her to piece together a band herself. The band originally consisted of Hayley, the Farro brothers, guitarist Jason Bynum and bassist Jeremy Davis. The label later went into cooperation with Fueled by Ramen which was more suitable for Paramore’s music at the time.

Their commercial breakthrough may have been the release of the song “Decode” for the first film of the Twilight saga, a dark song which fits the film perfectly and inspired thousands of teenage girls to dye their hair bright red or orange, Hayley’s trademark.

But what made them so popular amongst young people and turned Hayley into such a role model for young adults?

Firstly, Hayley Williams’ powerful voice and undrainable energy on stage blows away any critics during live performances. She also dislikes the idea of her voice being auto-tuned as is a common practice in the music industry. 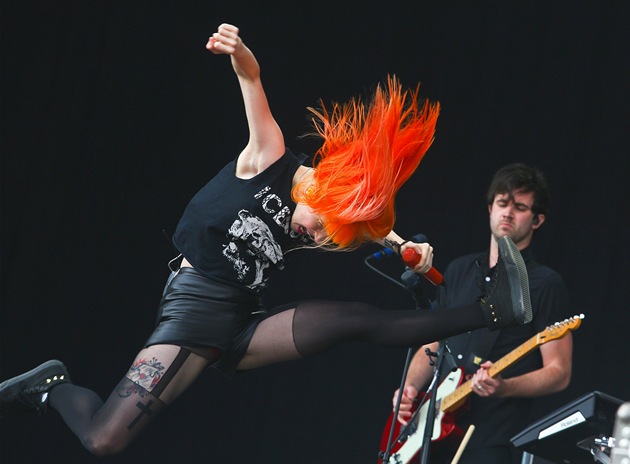 Moreover, Hayley has written or co-written all of the songs and the lyrics herself, refusing to let other people put their ideas into her songs. The band’s lyrics reflect the process of growing up and being away from home for a long time (“Franklin”), thus, many can identify with the band. Some other songs are about more serious topics like child abuse (“Brick by Boring Brick”). On top of that, all of the band members were very young, under 18, when the band was formed.

The band went through a difficult time when Hayley and Josh, who had been secretly dating, broke up. When Josh left, one of the main songwriters of the band, it resulted in a change in music leaning more towards a poppy style.

One quote of Hayley that struck me most when fans criticised Hayley for “changing” was the following:

“It’s confusing when people who do not know me say they miss the old me. You know me merely through the lyrics I write and the pictures I’ve been in. There is no old or new Hayley. There is however an older Hayley. I’m 25 now. Good on me for living through all these years with a million people’s judging eyes all over me and thinking they know me better.”

After members leaving and rejoining the band, the band now consists of Hayley Williams and Taylor York.

Paramore is one of the few bands with a female lead singer. In an interview with MTV Hayley speaks about what it is like to be the only girl in the band. She said that she recognised the fact, that it is still rare and unusual to be a front woman in an industry that is dominated by men. Hayley, however, saw this more as a challenge than a disadvantage. She saw it as a game that she loved winning every night. But she also added that the fact that she looked like a teenage boy at the age of 16 might have helped. When she went on stage, she always had an aim in mind:

“Cause I knew that I wanted to do something important… mainly, make it in a world where people aren’t supposed to make it.”

Albums that you should definitely check out are:

All We Know Is Falling